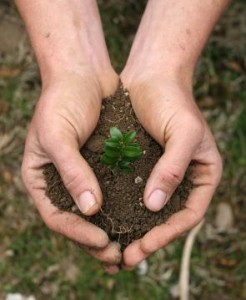 Bacteria are all around us, and without them, life itself would be impossible.

Eating dark chocolate or working out can trigger the release of “happy chemicals” in the brain; natural anti-depressants that have been shown to elevate mood, enhance pleasurable sensations and create a sense of overall well-being. Now studies are showing similar effects from dirt gardening in rich organic environments and from seeing, smelling and picking home-grown veggies and fruits. A sequential series of studies shows researchers are linking gardening activities with increases in pleasurable brain chemicals such as serotonin and dopamine.

Back in 1989 Dr. David P. Strachan proposed his ‘Hygiene Hypothesis’ in the British Medical Journal. He observed that allergic diseases were less common in children from larger families because they were more likely to be exposed to a variety of infectious micro-organisms than children in smaller-sized families. Later investigation by immunologists and epidemiologists have championed this theory for the study of allergic disorders and acquired immunity.

Are we too clean?

Fast forward to today, and studies are linking ultra-clean modern homes in rich countries complete with anti-bacterial wipes during childhood with an increase of allergies, asthma (and discussion on the rise in autism). There’s even a new name for too clean: ‘Nature Deficiency Disorder’.

This baby is having a great time getting dirty!

Getting dirty is a good idea

Contact with organic garden soils teeming with microorganisms can trigger the release of serotonin in the brain, a natural anti-depressant that also strengthens the immune system. In particular the ubiquitous bacterium Mycobacterium vaccae found in soils around the world has been studied.

In 2000 Dr. Mary O’Brien, an oncologist at Royal Marsden Hospital in London, reported that lung cancer patients inoculated with a strain of M, vaccae exhibited fewer cancer symptoms and improved emotional health, vitality and even cognitive function, caused because the immune response to this bacterium induced the brain to produce serotonin. This molecule is a neurotransmitter (a chemical messenger between nerve cells) and low levels of it are a symptom of depression, so higher levels contributed to patients well-being.

Other studies continue to link early childhood exposure to common soil-borne bacteria with protection against allergies and asthma in adulthood. A 2004 study by Dr. R. Martinelli in The Journal of Allergy and Clinical Immunology assessed the bacteria’s mode of action. In 2007 Dr. Chris Lowry reported in Neuroscience that mice exposed to this same beneficial soil bacterium were less depressed and exhibited a more active coping style than mice lacking the soil bacteria.  This strain of bacteria in the soil was found to trigger the release of serotonin in the brain, which in turn boosts immune systems, elevates mood, decreases susceptibility to depression, and increases neuron firing related to alertness.

Then, since serotonin plays a role in learning, Drs. Dorothy Matthews and Susan Jenks investigated the idea that exposure to specific bacteria in the environment would make mice smarter. In 2010 they presented their findings at the American Society for Microbiology, holding that mice fed M. vaccae navigated a maze twice as fast as control mice (though the effects decreased over three weeks, suggesting the effect is temporary).

So all that sandbox play, mud pies, dirt eating, Tonka trucks and Fairy Gardens seem to have been good for us. 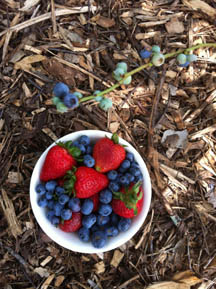 Delicious and filled with anti-oxidants and anthocyanins

While peacefulness, serenity and communing with nature all play a role in the natural high associated with the great outdoors, actually picking and harvesting garden fruits and vegetables also has an impact on brain chemicals. Researchers speculate that due to humankind’s long [~200,000 years] history of hunting and gathering, dopamine is released in the brain’s pleasure center when food is located: seen, smelled or actually picked.

“These studies help us understand how the body communicates with the brain and why a healthy immune system is important for maintaining mental health,” Dr. Lowry quipped. “They also leave us wondering if we shouldn’t all be spending more time playing in the dirt.” 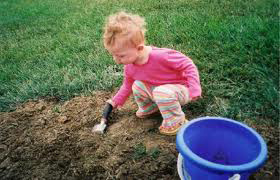 Outdoor exploration for a future gardener.

Boost the biological life of your garden soil.

To ensure your soils are teeming with microbial life, a very popular product is Instant Compost Tea Alternative that contains a balanced ratio of biology, humic, fulvic, kelp and molasses. In addition CT-Myco contains proprietary biological ingredients. These products do not require brewing – just mix and go.It is easy to add an instant compost tea alternative with the SoilNoc® family of biological soil inoculants from AgVerra® http://www.AgVerra.com add beneficial biology to soils, vegetable gardens, turf, pastures, cropland, nurseries, container plantings, greenhouses and landscapes. Visit the website to compare and contrast these great products, and purchase the one that can maximize your soil and harvests. See you in the garden! – Geri Laufer