Posted on 18 August 2011 by Christiane Marshall 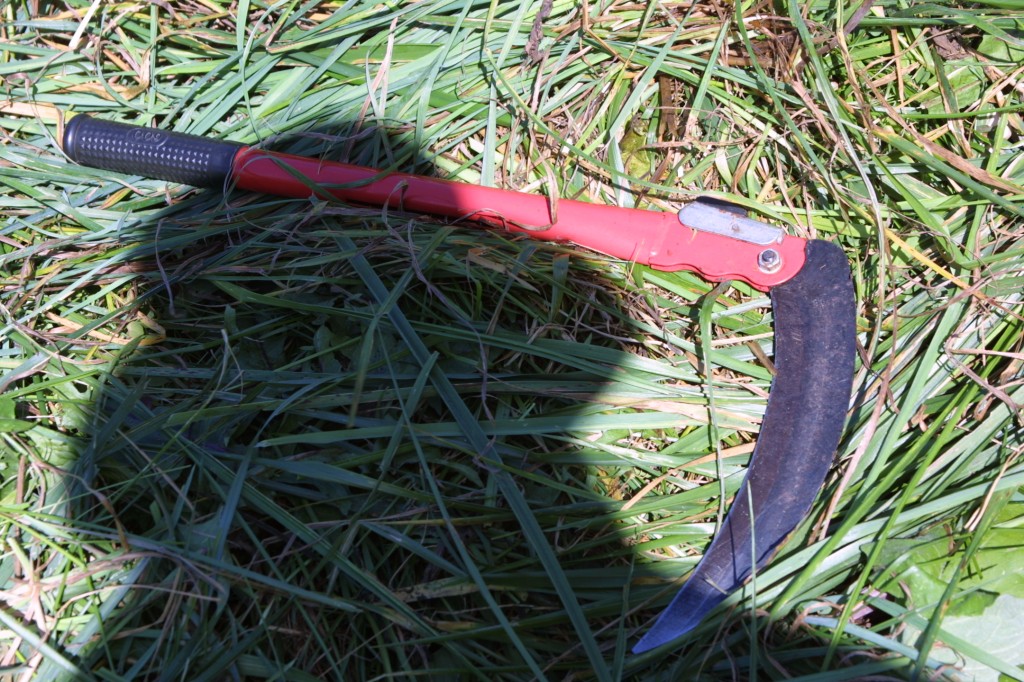 Where’s the garden? Did you ever feel like that after neglecting your garden for a time? Since I was only there to prepare the soil before I left, I had no idea what to expect. My husband did the planting and watering.

(This is the second article in the Travel Garden Notes series. See the first one here.)

What Should You do When Overrun with Weeds?

I would have loved to call someone with a bush hog, but the budget’s tight. So, I took out my scythe and started searching for the garden by slashing weeds, some that had gotten up to 1 inch thick, and well, at least one looked like it was 8 feet tall. (Well, maybe two…or more.)

I had prepared square foot gardens because I knew my husband wasn’t into pulling weeds, and really didn’t have the time to weed. There were very few weeds in the gardens themselves, but where were the gardens? 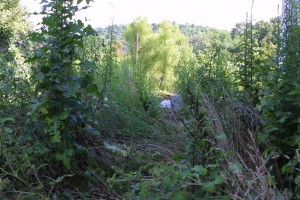 The weed eater went on the blitz, and well, he didn’t know we had a scythe. And he forgot to tell me about the problem. (Just to be clear, he has a two hour, twice a day commute. I’m not complaining!)

I wasn’t born in Southeast Ohio. I didn’t grow up in Southeast Ohio. I’m a transplant. But it seems to me that weeds in this part of the world are somewhat virulent. There are lots of them and if you don’t have a bush hog and a tractor, a pasture turns into a forest in no time.

How Does One Weed a Garden?

If you’re a beginner, you may have heard about weeding, but you aren’t really sure how it’s done. You may even be unsure which seedlings are weeds and which are the garden plants.

The best time to weed is when the sun is hot and the weeds are small. Take a hoe and slice the new leaves from the stem, rake the weeds into a pile to bake in the sun. It’s simple at this stage. If you allow the weeds to grow for a week or two, more desperate measures become necessary.

Depending on the type of weed, it may need to be fully uprooted.With some, just a tiny piece of root left in the ground becomes a new plant in itself. It’s just like an old episode of the Twilight Zone–where you thought you uprooted one plant, up comes one hundred, and almost overnight.

Don’t believe me? It happened to me one year when I had a new patch of garden plowed. I didn’t get to the soil for two weeks. I woke up one morning and it looked like the brown rectangular patch had a snow cover. On closer inspection, I found that a plant that looked similar to white morning glories had taken over. I tried my small tiller but the vines kept getting tangled in the blades. So I weeded it by hand until my hands were numb from pulling.

What Happens When Weeds are Given a Chance

See, it doesn’t take long for weeds to become established. Some are quite beautiful; some ugly. 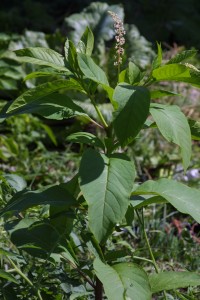 Poke root is a beautiful weed.

Some have long and powerful taproots. Some creep along the ground, climb and wrap around everything in its path.

Some are poisonous. Some sting through the thickest garden gloves. Some, like multiflora rose, will climb, sting and choke out everything in its path.

Finding burdock will make any gardener despair after several attempts to eradicate it. 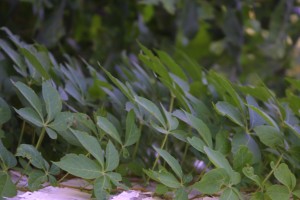 Left unchecked, virginia creeper will give your home the sleeping beauty syndrome.

Everyone knows how it wasn’t just Sleeping Beauty that fell asleep, but the entire town–including the gardeners and landscapers. And of course we all know that virginia creeper or something closely related, wrapped itself around every square inch of that town. We also think it took the whole of 100 years to accomplish that. But the truth is that it only takes two years for virginia creeper to engulf one building.

Do Weeds Have any Redeeming Value?

As I mentioned earlier, there are some that are beautiful. Some of these weeds actually have redeeming medicinal and/or food value.

For example, the root of the burdock is a staple Japanese vegetable and is used as an immune boosting herb. It’s actually very tasty during its first year of growth.

However, if it is not grown in cultivated soil, it is extremely difficult to dig up its long tap root (which can grow to be two feet long). Leaving part of a root in the ground will give it a chance for a second year.

First year burdock has large leaves. The second year of growth is when it grows to be 6 feet or more and when the flowers and burrs appear. 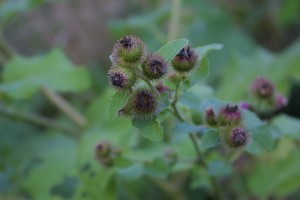 Second year burdock can grow to be 8 or 9 feet tall, and these burrs will appear on its branches.

Dandelions are high in calcium and have other medicinal and nutritional benefits.

Many weeds, like the dandelion, are edible and highly nutritious.

Our five foot iguana loves dandelions. So I made sure to pick some for him between swings of the scythe.

When I went home two months ago, I saw that the weeds were beginning to take hold. When I was needed to do other things, I held out hope that my husband would get the relatively benign situation under control. But just in case, I asked him to plant my comfrey root inside a tire. 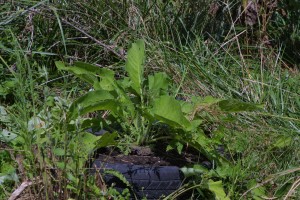 Comfrey is an herb I planted on purpose. 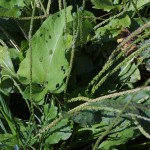 Need fiber? Look no further than your lawn.

Need fiber? Did you know that psyllium seed grows on your lawn? 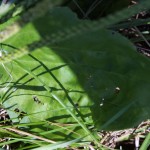 Recognize the leaves from your lawn?

Large Piles of Weeds Vanquished by the Scythe, and Lots of Beauty

I finally found the gardens and found that there was a good harvest thriving under the shadow of the weeds. Fortunately, well prepared soil saved the day.  For a few cents per plant, you can infuse your soil with live microbial helpers (mycorrhizae) that will keep on giving. It’s the only soil amendment that replicates itself. It’s such a no-brainer, I wonder how I ever did without them!

Subscribe or come back in a day or two and I’ll talk more about how to deal with individual types of weeds. For now, check out the pictures below of my gardening adventure at home: 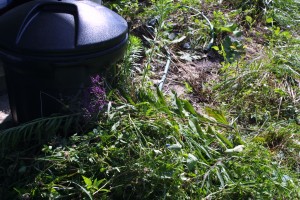 Pile of weeds almost to the top of the trash barrel. I forgot to take a picture when I was done! 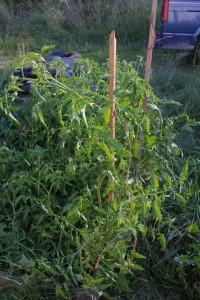 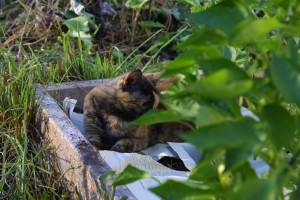 I placed newspaper over the soil to protect it from cats... 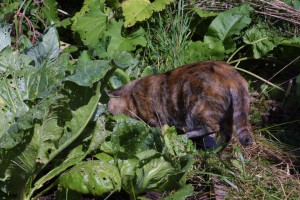 Between weeds and cats, I could have been in deep despair! 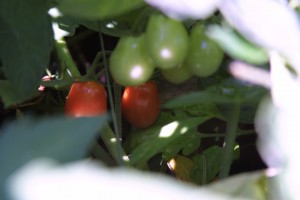 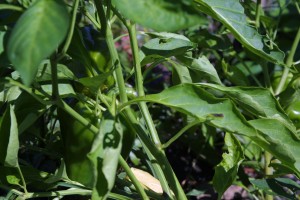 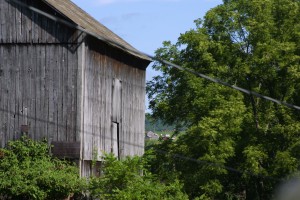 No virginia creeper on this side of the barn! 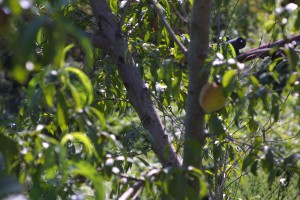 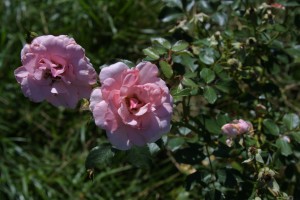 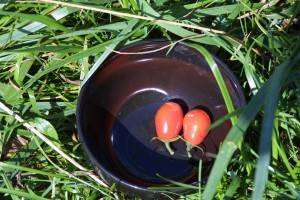 Christiane Marshall is a freelance writer/copywriter and special education teacher living on 173 acres in Southeast Ohio. She is a minister's wife, mother of five grown children and a grandmother of one new baby girl. Christiane specializes in copywriting but also enjoys writing articles on many subjects including organic gardening, education, special education and advocacy, faith, travel, and animal rescue.
View all posts by Christiane Marshall →
This entry was posted in Soil Health, Travel Garden Notes, Weeds and tagged bush hog, scythe, travel garden notes, weeding, weeds. Bookmark the permalink.